In recognition of October Fire Prevention Month and as a lead into The Guidance Center’s Celebration of National Parents as Teachers Day on November 8, a Group Connection was held at the Central Fire Department in Punxsutawney, PA.

The Volunteer Firemen hosted the Group of families. Kids were able to: 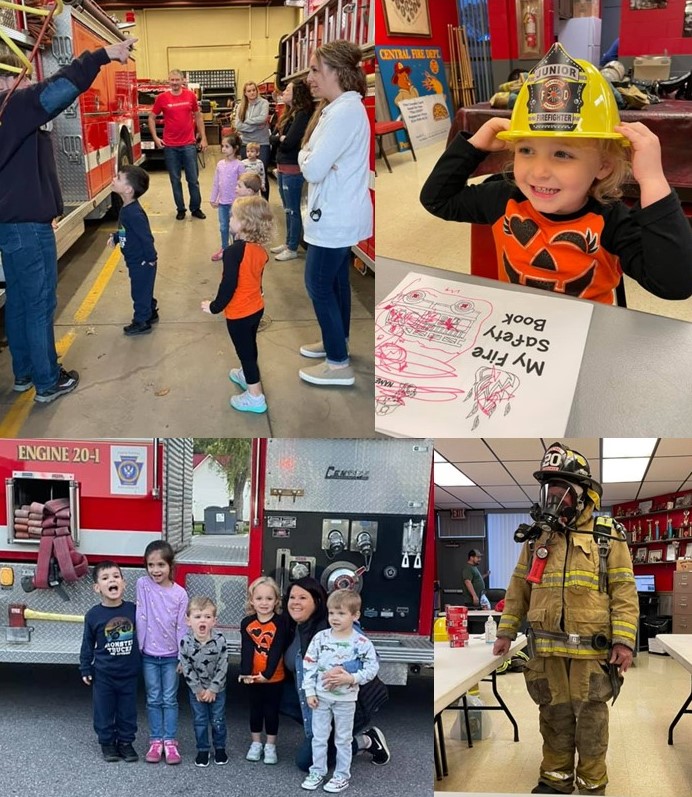 The parent discussion was a question and answer opportunity.

A father explained that they had a fire plan where they used to live in the country, but he wanted to know where to tell family to meet now since they’ve moved into town and other houses are close by.

Child find stickers were provided for the parents. The discussion about safety, and if it is appropriate to identify where child’s room in the home is with the sticker was discussed.  The Firemen said the window sticker works because that’s the first place firemen will respond to. The thought was that if someone were to be considering a child abduction or other crime against a child, that it’s more likely that the home/family has been watched by a would be perpetrator.

A question was raised about response time based on location identification from a cell phone call. The firemen recommended that parents teach kids their home address. Cell phone GPS locations are not always accurate.  Firemen reminded families that, it’s not like what is seen on TV.

The shortage of volunteers in our rural areas, affects response time and this may be longer than what you typically see on TV because volunteers are not sitting at the fire station waiting for a call like we see on TV.

Families got smoke detectors and child safety stickers from fire dept, the kids got hats and an activity book.

Firemen and Parents all provided feedback and stated, this was the Best Group they’ve had/attended.